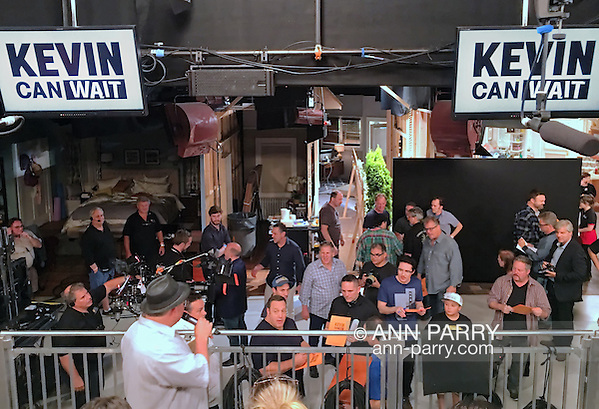 THE HOUSE OF 5 GABLES

First we saw the pilot, which gave background to the episode being filmed that night. It introduced us to the Gable family: father Kevin, a newly retired police officer; mother Donna, a school nurse; and their children Kendra, Sara, and Jack.

BTW from LI:   The Gable family lives in the south shore town of Massapequa, so they’d have to move just a few miles west to be the Gables of Merrick Gables, a 1920s development of Spanish stucco houses near my home.

Long Island’s JOEY KOLA was the warm up comedian. Over the course of the night, Joey identified dozens of cast and crew … had us sing along to songs the DJ played … shared anecdotes that were probably at least partly true… did fast and furious impressions (mostly of Long Islanders, of course)… and introduced countless audience members who were fellow comedians, notable Long Islanders, media personalities, and relatives of cast and crew.

The first scene filmed was the first scene of the episode, and there were several partial and whole retakes (that I found riveting) – of this scene and scenes in general – in order to tweak dialogue and action, and film from different viewpoints. As Director ANDY FICKMAN – who made some genuinely funny comments when cameras weren’t filming – explained to the audience, the sitcom studio filming is done in chronological order – except that night the last two scenes were reversed so Mary-Charles Jones, a minor, would finish her last scene before 11 PM.

I especially liked how Kevin Gable – the eponymous character played by star Kevin James, a gifted everyman physical comedian – didn’t always have to be the one getting the Big Laugh, so his character had the chance to convey emotion, doubt, conflicted feelings – you know, things real people feel while living life without a laugh track, let alone a live studio audience.

And I hope to see more of Chale, who stood out as a unique, engaging character.

BTW from LI:  “Chale” has a range of meanings throughout the world: Perhaps the village Chale in the Isle of Wight, England, is relevant. Also, “Chale” means “strong” and “manly” in Spanish, which might be something to think about. 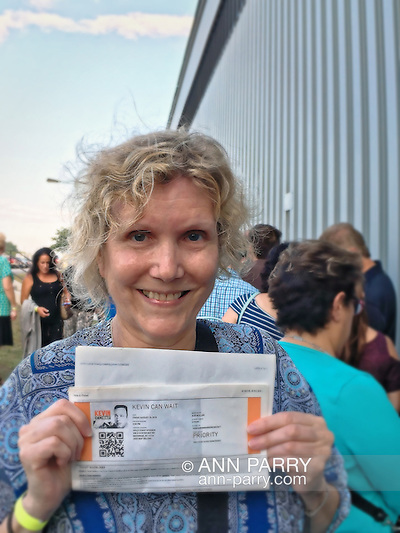 When Executive Producer ROCK REUBEN took questions from the audience, he stated that KCW will be free of references to a certain infamous Massapequa resident from the early 1990s.

BTW from LI:  Wouldn’t it be fun if Kevin Can Wait has Kevin bumping into, or even hanging with, Long Island natives Alec Baldwin, Ray Romano,  Jerry Seinfeld – say, at All American Hamburger?

Cameras weren’t allowed, but cell phones were, though they couldn’t be on/out during filming.

Media, including People magazine and Newsday, were there to cover the night, and though I wished now and then I were covering it with my Nikon D4, it was a nice change to be sitting there with my daughter and fellow audience members, simply enjoying the show – you know, things people do while living life without a pro DSLR and Press badge.

The long evening of filming was so much fun it sped by. If you’re in the Long Island area and interested in free tickets to a future filming of Kevin Can Wait at Gold Coast Studios in Bethpage, visit 1iota.com. And don’t forget to eat dinner before you go to the studio.

So, okay, maybe it’s partly because I’m from Long Island, plus there’s a retired police officer in our family, but I enjoyed watching the pilot and filming of the first episode of Kevin Can Wait, and can’t wait to see its premiere on Monday, September 19, 8:30 PM (EST) on CBS.

UPDATE   9/2016: During Z100’s Elvis Duran Morning Show, Sue spoke with Kevin James about how much she enjoyed being in audience for taping of Kevin Can Wait at Gold Coast Studios in Bethpage, NY.

“Kevin Can Wait”:  my Photo GALLERY