What goes around (and around) has come around on Long Island this summer!

We can once again enjoy Nunley’s Carousel, which recently reopened after the Covid-19 pandemic forced it to close in 2020.

The official ceremony on August 16th had speeches, a ribbon-cutting, and the ultimate fun treat for all – especially the many young children and their parents – a nostalgic ride on Nunley’s Carousel’s lion, 41 horses, and chariot.

• my Photo Gallery – Nunley’s Carousel reopens
(Plus, click each photo below to see larger one.) 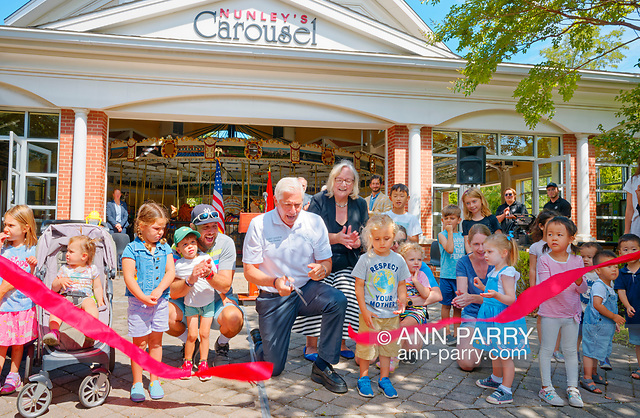 The carousel – now under the management of the Long Island Children’s Museum – is located in the Nunley’s Carousel glass pavilion on Museum Row in Garden City, It’s between LICM and the Cradle of Aviation Museum, which previously managed the carousel.

If you’d like to ride the carousel this summer, be sure to visit by September 11th, since it will be closed from September 12 to October 4, 2022 for the Long Island Children’s Museum Fall Fix-Up. 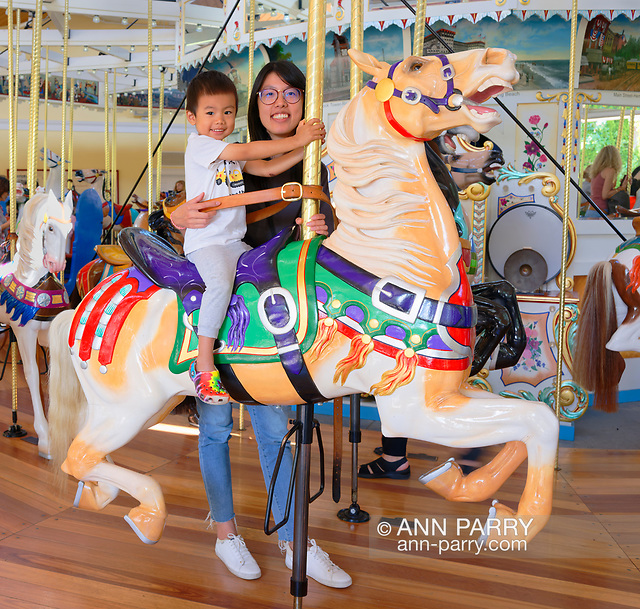 Excerpts from his speech:

Let me tell you something, I was one of those kids that grew up at Nunley’s, and I grew up in Valley Stream, probably 4 1/2 – 5 miles from Nunley’s.

And on a Sunday, if we were really good, and my 3 sisters and brother, we would be treated to going to Nunley’s. And we would ride the roller coaster, and we’d ride the other rides.

And of course, the highlight was always the carousel, and it brings back so many childhood memories to be here today.

I just talked to so many people in the community who remember vividly the first time they went to Nunley’s and they used the carousel and they took all the rides,

And you know, this carousel right here is a real work of art. It’s over 110 years old, and the fact that we could restore it is really something special.

So I couldn’t be more pleased to be here today for the opening again of the Nunley’s Carousel, a place that brought me so many great memories, childhood memories.

I have 3 sisters and a brother. They live in Arizona now. They are gonna be so jealous when I send the photos today of that.

By the way, we got to go [to Nunley’s] if we got good grades and we behaved ourselves, so obviously my sisters got to go a lot more than I did….

Based on the laughs following Blakeman’s final comment, many related to it – I certainly did! 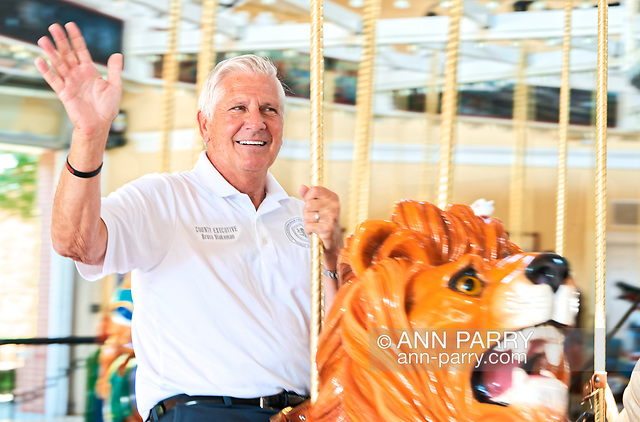 Among those Blakeman thanked for attending: 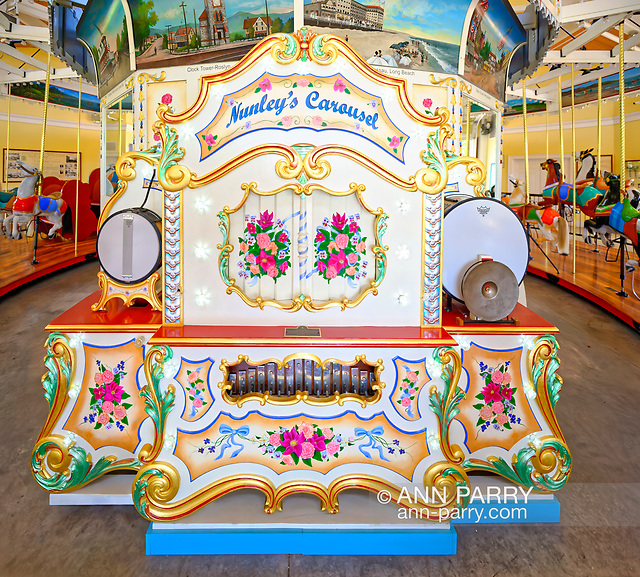 When the carousel first started, I was surprised the music was a recording of Billy Joel performing his ‘Waltz #1 (Nunley’s Carousel)’ on the piano. Why wasn’t the organ playing his music?

I look forward to my grandchildren enjoying the full Nunley’s Carousel experience in the future: riding the magnificently carved and decorated carousel horses, lion, and chariot + hearing the carousel organ playing music. 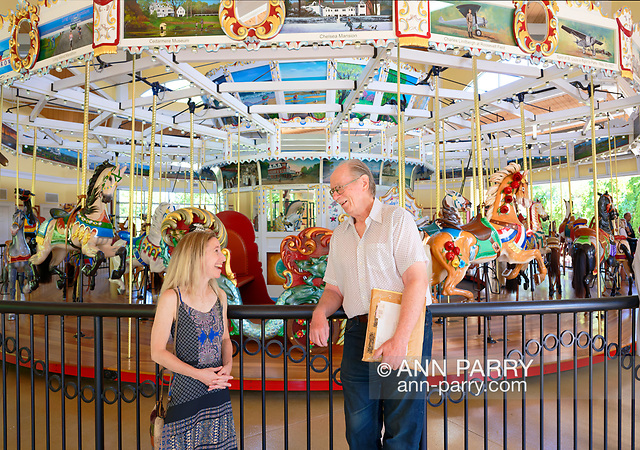 Garden City, N.Y., U.S. August 16, 2022. L-R, BETH OBERGH, of Wantagh, and BOB STUHMER, of Garden City Park, chat when Nunley’s Carousel officially reopens. Stuhmer arranged many of the songs the carousel organ plays. Obergh took care of and operated the carousel for 11 years until all carousel employees were laid off in 2020. (© 2022 Ann Parry/AnnParry.com) 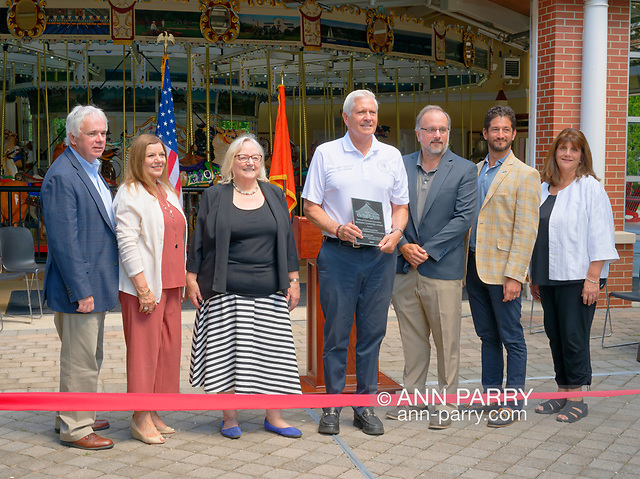 GARY GRASSO, a board member of the National Carousel Association, presented the Historic Carousel Award 2020 to Nunley’s Carousel. NCA had been waiting since the Covid-19 pandemic hit Long Island to present the plaque. (see above photo)

… and the Nunley’s Carousel experience is – wait for it – priceless! 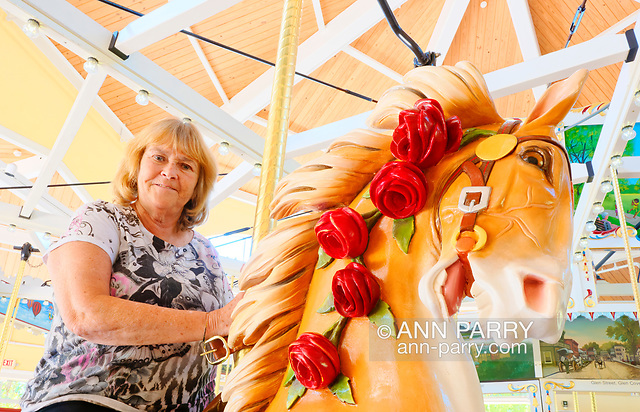