An Evening with Andrew Chaikin, at the Cradle of Aviation Museum, Thursday, May 23, began with refreshments near the “LEM” room, home of the actual Apollo LM-13 lunar excursion module built for the cancelled Apollo 18 mission.

What a great setting for photos of the bestselling author of “A Man on the Moon: Voyages of the Apollo Astronauts”!

And when asked if I wanted him to go on the surface of the (simulated) moon – the first time anyone offered that in all the years I captured photos there – I was so surprised I blurted out, “Are you sure it’s okay?” He smiled and good-naturedly assured me he had permission. 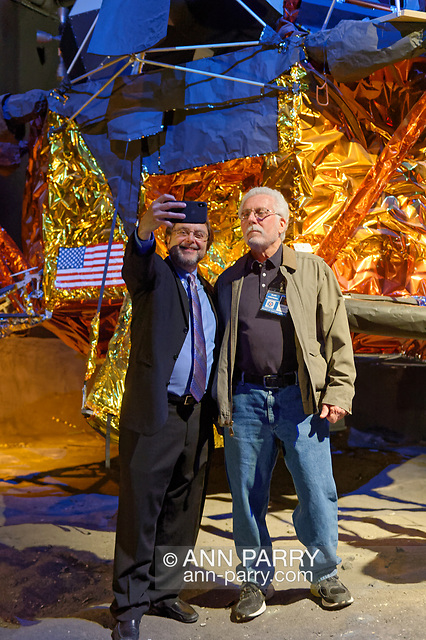 Garden City, New York, USA. May 23, 2019. At left, ANDREW CHAIKIN takes a selfie with ALAN CONTESSA, who worked on the Apollo 11 lunar module, as they stand in front of the genuine Lunar Module LM-13, built for cancelled Apollo 18 mission. (© 2019 Ann Parry/Ann-Parry.com)

After capturing photos of Chaikin at LM-13, I saw a few guests come in, including Alan Contessa, who, as a 22-year-old Grumman employee in 1969, was responsible for making and installing the gold silver thermal foil covering the lower part of Apollo 11’s lunar excursion module LM-5, the “Eagle” of “The Eagle has landed” fame.

My favorite LM area photo of the evening shows Chaikin taking a selfie with Contessa as they’re standing in front of the LM-13 thermal foil, which Contessa, as a volunteer, worked on for the Cradle of Aviation display.

Soon it was time to go to the JetBlue Sky Theater Planetarium, for Chaikin’s talk about growing up on Long Island and interviewing Apollo astronauts.

Chaikin became obsessed with space when he was five, and he was 12 when he met his first NASA astronaut, Alan Bean, who later became his dear friend and mentor.

Young Chaikin literally dreamed of meeting Neil Armstrong and getting his autograph. During a trip with his parents to Washington DC in 1971, he found out Armstrong was working at NASA Headquarters. The second time Chaikin went to HQ, he ran into Armstrong in the hallway, where the astronaut signed an autograph for him, and then took a selfie of the two of them.

As adults, they got to know each other as friends, and in 2002 Chaikin’s wife Victoria Kohl took a picture of Armstrong and Chaikin, who was holding that 1971 selfie.

Chaikin, an animated, knowledgable, and fascinating speaker – and I’m not saying that just because we have the same birthday – talked about the Apollo 11 mission in great detail, with photos and videos projected on the huge screen behind him. NOTE: Video 2 above includes most of Chaiken’s talk.

During the Q&A, the first guest called on asked if Chaikin thought the [2018 biographical drama] movie “First Man” portrayed astronaut Neil Armstrong accurately. The audience laughed when Chaikin quickly answered, “Not at all….”

The evening ended with the CNN Films documentary “APOLLO 11,” but I had to leave before it ran on the giant curved screen, so I returned to the IMAX theater with a friend to see the film that Sunday afternoon.

Walking up and up and up the theater stairs, we turned into the second row from the top, sat down, and enjoyed the awe-inspiring, newly unearthed views of the Apollo 11 astronauts, support teams, and the mission itself.

Andrew Chaikin at Cradle of Aviation:  MY GALLERY

1 thought on “Andrew Chaikin: Over the Moon about Space”