I got such happy news recently – my photograph “The Three Graces” won First Place in The Art Guild’s current Photography Exhibit: “Everything Old is New Again.”

TAG board members and the juror stressed how each photographer with work in the exhibit had reason to be proud, since there were over 200 entries, and Elderfields has room to display about 65 pictures. 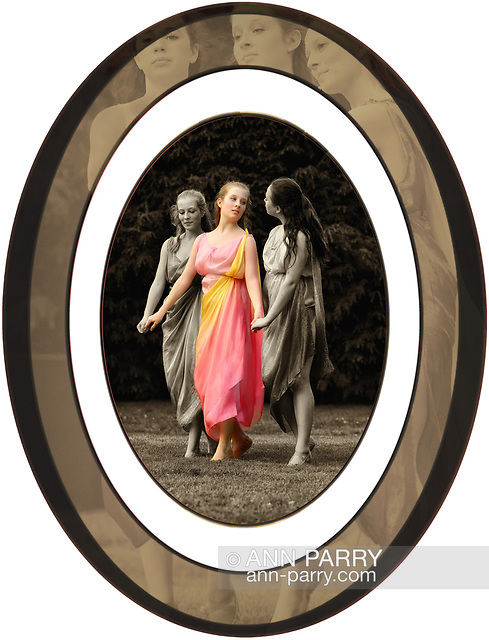 “The Three Graces” is part of my multi-year photographic series of Lori Belilove & The Isadora Duncan Dance Company performing on the grounds of Old Westbury Gardens, an historic estate on the Gold Coast of Long Island.

I captured the photos used to create “The Three Graces” during a dance of the mythological trio at the South Allee, a vast evergreen-lined path unfurling from the rear of the mansion, and I completed the oval photo in 2020.

Expressing and unifying the dichotomy of the eternal and ephemeral, individual and group, past and present… helped inspire “The Three Graces.”

Juror HAROLD NAIDEAU is a photographer, artist, and educator. He teaches photography at several Long Island institutions, including Five Towns College and Stony Brook University. His photographic portraits include NYC inhabitants, and icons such as Andy Warhol, Kiss, and Robin Williams. Naideau’s book Women on the Wall: Graffiti’s Urban Mythology – Struggle, 2014, is a compilation of graffiti and poems about women.

Originally built as a one-room house, circa 1675, this historic building exemplifies “everything old is new again.”  (© 2019 Ann Parry, AnnParry.com)

Launch time was 3 PM for the Star Wars: Force Collector Book Signing at the North Merrick Public Library on Friday, December 20th, soon after author KEVIN SHINICK‘s early afternoon presentation at his alma mater Calhoun High School, and before his evening book signing at Merrick Cinemas, where he worked as a teen.

Since children were just getting out of school around 3:00 that last day before Winter Break, few people were there at the start of the young adult novel event. But a stream of people – mostly parents with their young sons and daughters – soon started pouring into the large meeting room, with many adults standing along the walls so children could sit.

Some came mainly because of the Star Wars novel… some because Shinick’s a fellow Merokean, a friend… and two came because he’s their son. 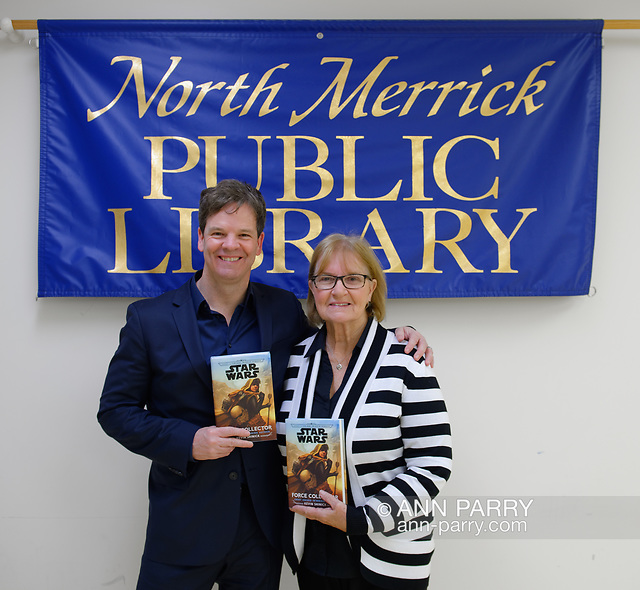 Q&A: “Everything he says is a lesson”

Shinick said, “Working with George Lucas – everything he says is a lesson.”

After the project got the green light, he stayed for a month at Skywalker Ranch, the California home and workplace of GEORGE LUCAS, the film writer, director and producer who created Star Wars.

Shinick was glad he stayed at Skywalker Ranch for a month, so he had a chance to ground himself being around Lucas.

“It’s hard as an artist not to get beaten down. You’re doing it because you set an objective and you succeed at that objective.” 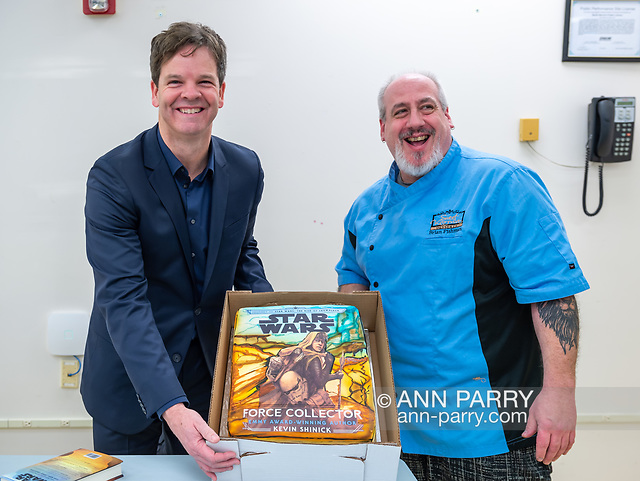 Shinick  shared a few of his life rules, wrapped in anecdotes often a bit humorous, self-deprecating – as in his Skywalker Ranch “wonk wonk wonk wonk” saga. Three of the rules he shared:

(2)  “You have to know who you are.”
He wanted to be like Han Solo, but it’s his lot in life to know he’s more Luke Skywalker.

(3) 1st half: “Always go to the door that opens.”
He didn’t expect to be a host of “Where in Time is Carmen Sandiago?” but he took it when offered.

2nd half:  “Don’t be afraid to shut that door.”
After “Where in Time…,” he “got a lot of hosting gigs.” Then one day – as he was driving to a meeting about an offer to host the show Extreme Gong – he had, as he looked back on it, a rather cinematic epiphany:

“Every time I did it, something was missing, and people weren’t looking at me as other things. I have to stop this.”

He added that he wasn’t negating hosting – it just wasn’t his dream.

After the book reading and signing, the strong affection and memories Shinick shared with many there at his hometown library burst into hyperdrive, with a force evaporating the time and space since they last met. 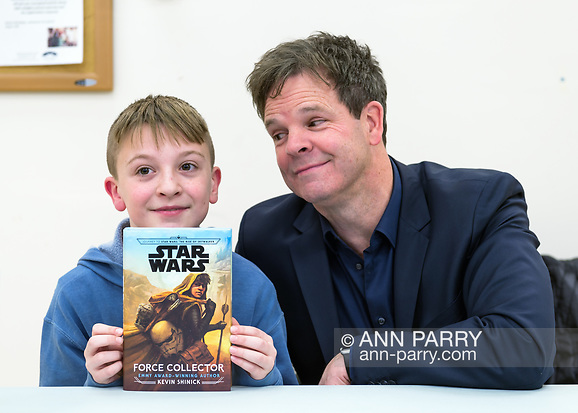 Karr leaves his planet Merokia on a quest concerning the fabled Jedi and the Force. Karr travels with his friend MAIZE RAYNSHI and his droid RZ-7 (Arzee).

Plus, there were similarities in our orbits, including that my younger daughter Laurie was a member of the Calhoun H. S. On Tour Company, under Director SAL SALERNO, about a dozen years after Kevin Shinick was.

In a more tenuous, colorful coincidence, my mom, MARY ANN PARRY, an opera singer, gave brief voice lessons to teen DEBBIE GIBSON, Shinick’s On Tour co-star in Fiddler on the Roof in the late 1980s. 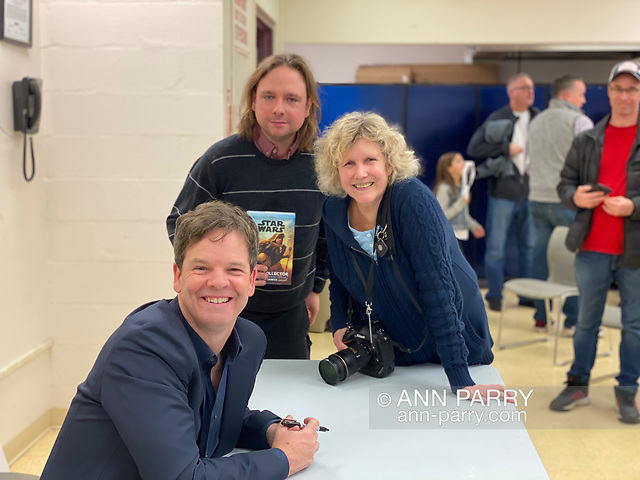 • BIO –  Briefly, Kevin Shinick is a Broadway actor; a voice artist; a writer – for films, plays, TV shows, a Netflix comedy, Marvel and DC Comics, a children’s book (“Star Wars: Chewie and the Porgs“), and stop-motion series “Robot Chicken,” which he won Emmy for; a host for TV shows such as “Where in Time is Carmen Sandiego?”; writer and director of Spider-Man Live!; the husband of producer Eileen Meyer; and dad of someone who isn’t (yet) a pilot.

• Baby Yoda says: “Winner You Are! Feel the Force -The Book, You Must Enjoy”: 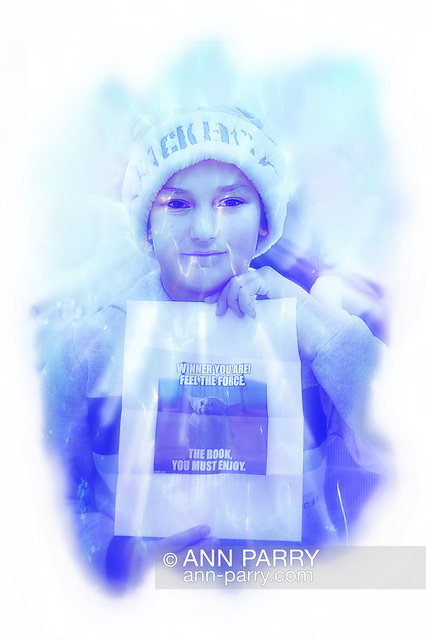 Merrick, NY, U.S. Dec. 20, 2019 Boy holds his winning ticket, with picture of baby Yoda and ‘Winner You Are! Feel the Force’ on it, at book signing for author Kevin Shinick’s STAR WARS: FORCE COLLECTOR at North Merrick Library. (© 2019 Ann Parry/AnnParry.com)