Early yesterday, the 18th Anniversary of 9/11, I heard a woman’s solemn, amplified voice coming through my open windows and thought it was from a neighbor’s TV playing the annual Manhattan 9/11 ceremony.

Having another idea a few minutes later, I walked outside and looked down the road to Park Avenue School. 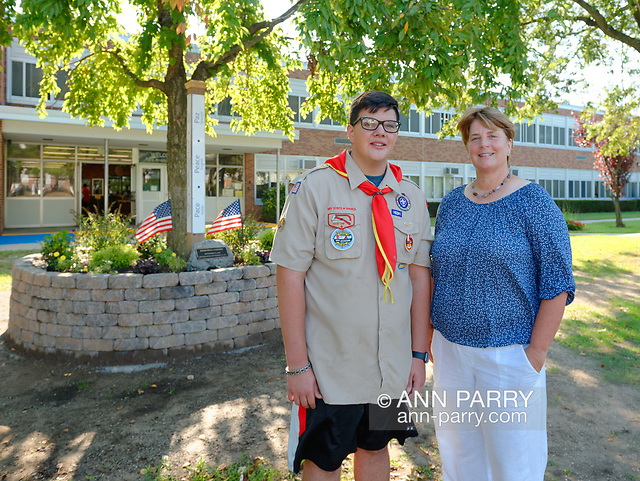 Hundreds of students, their teachers, and Principal EILEEN SPEIDEL were outside listening to a patriotic song as they faced the 9/11 Memorial Garden and the American Flag flying at half mast in front of the school’s entrance.

The new law, effective immediately, calls for a brief moment of silence in public schools throughout New York State at the beginning of the school day each Sept. 11th, to encouraging dialogue and education in the classroom and ensure an ongoing understanding of the Sept. 11, 2001 terrorist attacks and their place in history:

Governor Andrew Cuomo: “9/11 was one of the single darkest periods in this state’s and this nation’s history, and we owe it to those we lost and to the countless heroes who ran toward danger that day and the days that followed to do everything we can to keep their memory alive. By establishing this annual day of remembrance and a brief moment of silence in public schools, we will help ensure we never forget — not just the pain of that moment but of the courage, sacrifice and outpouring of love that defined our response.”

The 9/11 terrorist attacks in nearby NYC leveled the Twin Towers of the World Trade Center, killing over 3,000 people, including first responders who later died due to breathing toxic air at the sites.

Park Avenue School’s students live in North Bellmore and North Merrick, and residents from both towns were among the victims of the attacks. 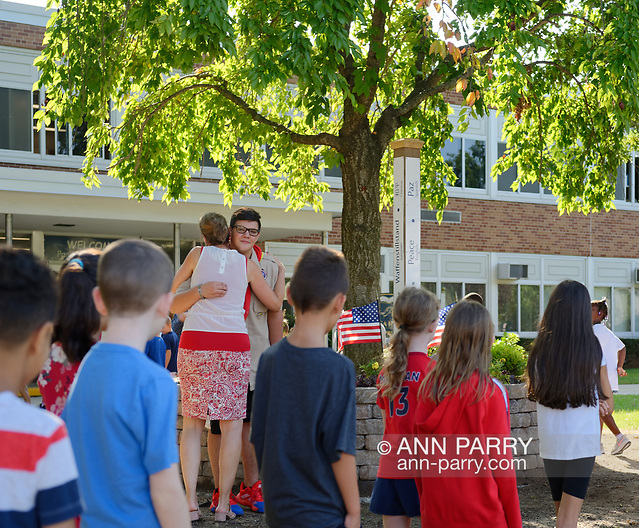 During the ceremony, NICHOLAS CARRANO, 15, a member of Merrick Boy Scout Troop 123 and a student at Mepham High School, stood next to the school’s 9/11 Memorial Garden, which has a sturdy two-foot tall circular stone wall around a shade tree and flowering plants, a Peace Pole with “Peace” written in 12 languages, two American Flags, and a plaque atop a small stone monument.

Carrano, a graduate of Park Avenue School, was there because this summer he built the current 9/11 Memorial Garden for his Eagle Scout project. The former garden only had that plaque on its wood rectangular border. As Principal Speidel explained, people didn’t even realize it was a 9/11 Memorial Garden because the plaque blended in with the wood.

As students made their way back to the school building, they slowly looped around, and often paused at, the 9/11 Memorial Garden.

Some of the young girls and boys walked up to Carrano to shake his hand, and some teachers who came up to him gave him a hug, as the students looked on.

I was a member of Park Avenue School’s first 1st grade class, and my strongest memory of that year was facing the front of the building as I stood by it with a group of people, and then writing my name on a piece of paper passed around.

Decades later, when I mentioned that odd memory to my mom, she smiled and explained I was the 1st grade representative at Park Avenue School’s cornerstone ceremony. 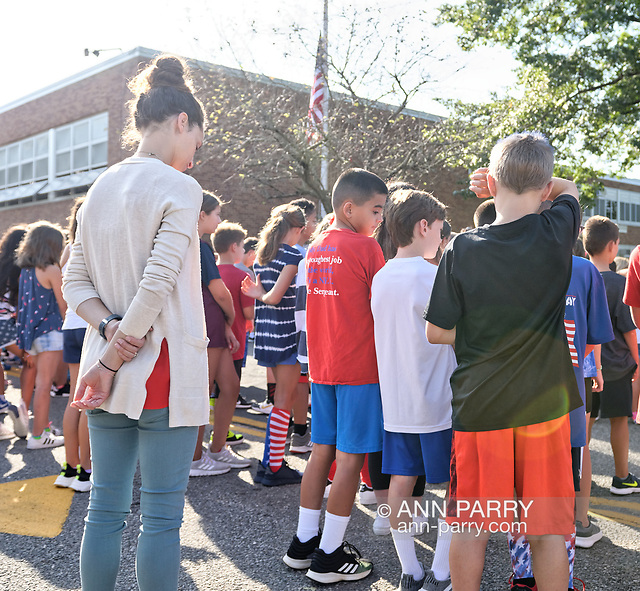 North Merrick, New York, U.S. September 11, 2019. At Park Avenue School students and staff listen to a patriotic song. Earlier in ceremony, Principal E. Speidel of the K-6 elementary school talked about the significance of 911 and the 9/11 Memorial Garden, on the 18th Anniversary of the terrorist attacks Sept. 11, 2001. (© 2019 Ann Parry/Ann-Parry.com)

I wouldn’t be surprised if the 9/11 Remembrance ceremony is one of the memories Park Avenue School students keep long after they graduate.

And if they have some form of this outdoor lesson each 9/11 at Park Ave, they likely won’t need to ask anyone what it was all about.