Tonight, ten days after the shortest day of the year, and hours before the stormy last hurrah of 2018 would become the dawn of 2019, I stopped at Cammanns Pond on my way home.

Struggling through the downpour, the light from the street lamp behind me surrendered before reaching water’s edge. 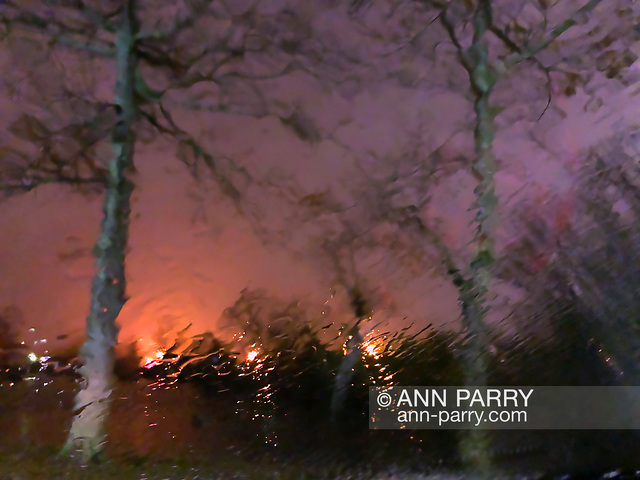 Rain coated the windshield seconds after each sweep of wipers, and dashboard lights bounced on the glass and water, so my bullseye view was light from distant buildings slashing an abyss.

But, after countless visits, I knew waterfowl must be near. Once my eyes adjusted to the darkness and I covered the instrument lights with an infinity scarf, I saw hints of a silent, nearly still raft of ducks midway between shores.

Aiming my iPhone from the space between steering wheel and windshield, I captured rain smeared photos of two bare trees standing sentinel in front of the pond.

Going outside, I stood behind one tree trunk then the other, to avoid throwing a shadow, and leaned out to take photos of the ducks, pond, shores and beyond.

Then I sat silent and still in my car as ducks slept at the Merrick pond, on the deluged south shore of Long Island…

on the northeast coast of the United States on Earth as it orbited the Sun, in a spiral arm of the Milky Way, in the Virgo Supercluster…

forty years after the world understood global warming and still had a chance to avoid the extreme, destructive weather Earth’s now experiencing due to the climate crisis.

No home is an island.

fyi fLI
In 1890 Hermann Cammann bought the Carmen farm house property on the north side of Merrick Road and rebuilt a larger version of the house, across from where Cammanns Park is now.