Music starting playing near the central cosmetics area of Macy’s in the mall, and a young woman and man rushed into an empty space in the aisle and started dancing.

The blond girl’s aqua shirt had Estée Lauder “Imagine having nothing to hide” on it, and the boy wore a white T-shirt, and after they did some particularly dashing jumps and lifts, several dozen dancers joined them. 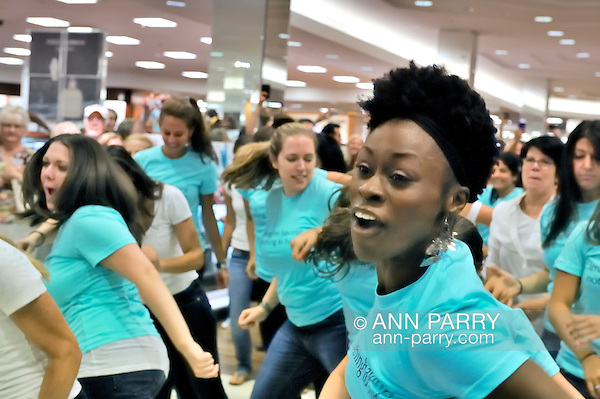 So we had ourselves a flash mob, with dancers who ranged from amateurs to pros, and from a young girl around 10-years-old, to a very pregnant twenty-something, to those who were my age and beyond. They danced to Martin Solveig’s “Hello” which Flash Mob America choreographed.

And the Long Island, New York, shoppers loved it, many taking out their cell phones to photograph the 4-minutes of unexpected fun that Summer of 2011 afternoon.