On Christmas morning, I read that The Interview, the supposedly satiric comedy by Sony Pictures Entertainment, was playing at Merrick Cinemas, the only movie theater showing it in Nassau County, Long Island. So, even though I still had most of my Christmas present wrapping left, I headed out to capture news photos before the first show, 12:30 pm. 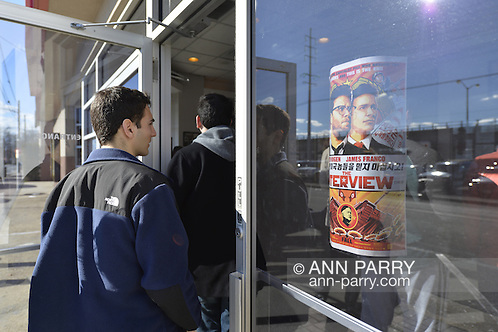 Due to the terrorist threats, Sony originally canceled public release of the film, but then changed its plans again, and released the film in a limited way, including several hundred independent theaters.

The Interview has earned overall poor ratings, from movie critics and from audiences on sites such as IMDB.com and RottenTomatoes.com.

Several people who bought tickets to the movie in Merrick said they were seeing The Interview mainly to protest the attempt to suppress Americans’ Right to Free Speech.

The Interview at Merrick Cinemas:  GALLERY