Today, over a hundred Wellington C. Mepham High School students walked out of class from 10:00 to 10:17 AM, one month after a teen used a semi-automatic rifle to kill 17 students at Marjory Stoneman Douglas H. S. in Parkland, FLA. 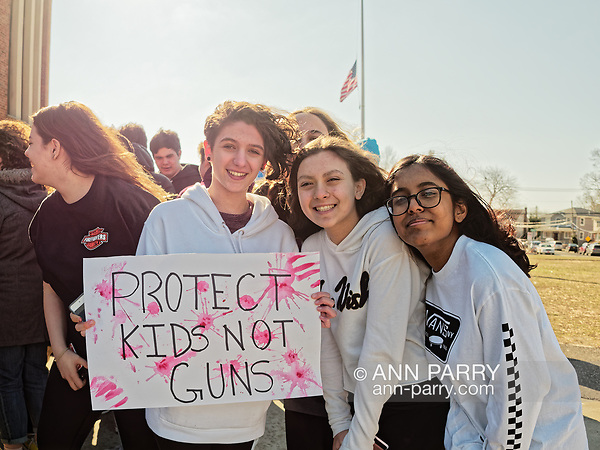 Mepham’s walkout was part of a nationwide protest to show solidarity with student shooting victims, and to demand U.S. lawmakers enact regulations and laws to reduce gun violence.

By 9:45 AM, several Nassau County patrol cars were parked on Camp Avenue in front of Mepham. School administration had requested police “just in case.” But neither the officers nor the school security guard, standing a distance from the walkout, needed to interact with protestors. 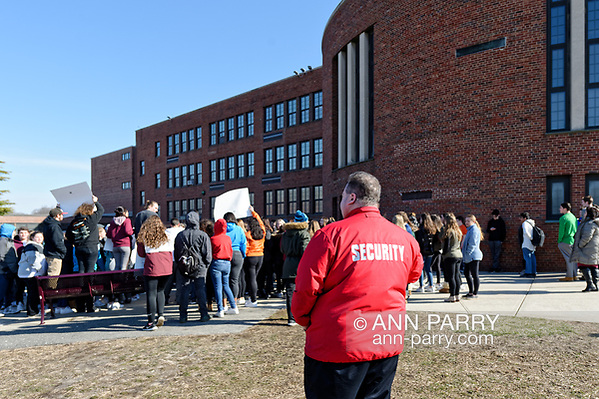 Several adults drove or walked to Mepham and stopped to look at the protest held at the west side of the school building. The most visible focal point from the street was four students standing on a bench and holding up big handmade protest signs. 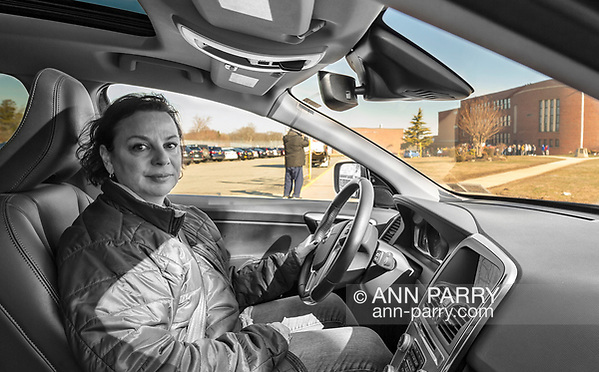 CRYSTAL PHOTIOU, of Bellmore, stopped her car in front of Mepham to watch the protest. When asked why she was there this morning, Photiou said:

Midway through the walkout, a car with a man and woman in it stopped in front of the school. The driver said they’d come from the student walkout at Calhoun High School – which, like Mepham, is in the Bellmore-Merrick Central High School District. Smiling, she added there were so many students protesting outside Calhoun it looked like the whole school was participating in the walkout.

The Vietnam War started not long after after I was born. By the late 1960’s, protests, notably including student protests, were helping turn public opinion against having American troops in Vietnam, which significantly helped lead to the withdrawal of our last troops by 1973.

I first began to understand the cost of the Vietnam War in 1968 when I was a junior at Calhoun High School. A military draft seemed guaranteed in the near future (in fact, the 1st draft lottery for Vietnam War was held Sept. 1969), and one of my closest friends, Tom, a senior, waited anxiously to find out if he was accepted into a military band, considered a safer assignment than the alternative.

My senior year, a small but earnest group of students held a walkout to protest U.S. involvement in the Vietnam War.

And in Calhoun’s Main Lobby, the plaque commemorating graduates who died serving in Vietnam had even more brass nameplates than expected for a school our size.

When I was an undergraduate student at SUNY New Paltz, Vietnam War protests were an inescapable part of life on campus, starting with the protest songs during Orientation Week concerts, just weeks after and 50 miles away from the Woodstock festival…  including a sit-in at the Administration Building around the time of the Kent State massacre, May 1970…  and continuing until our troops totally left Vietnam, shortly before I graduated. 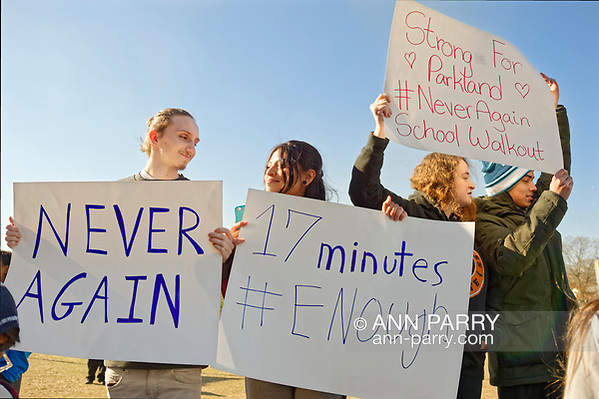 SIGNS OF THE TIMES

Properly motivated lawmakers – who replace incumbents, when necessary – can pass regulations and laws that both keep Second Amendment rights intact and also help significantly reduce the amount of gun violence, which is significantly, outrageously worse here than in other countries.

Today’s National Student Walkout to Protest Gun Violence is a hopeful step in the right direction. On March 24th there’s the March for Our Lives Rally in Washington, DC, and local communities. After that it’s time for the next steps.