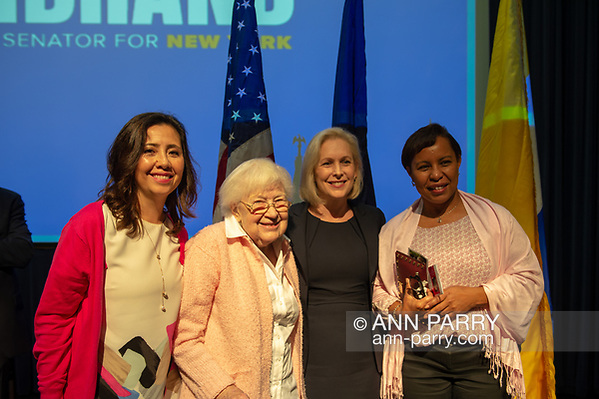 Senator Kirsten Gillibrand’s Town Hall at Hofstra University last night, Oct. 5th, landed at the start of the Columbus Day holiday weekend. But midterm elections were only 31 days away, and the Student Center Theater was packed.

After Dean Meena Bose, the moderator, introduced Gillibrand, the senator spoke to the largely supportive audience.

Anyone who wanted to ask Senator Gillibrand a question had taken a red raffle ticket, and put half of it in a glass bowl before the Town Hall began. Tickets were drawn at random for the Q&A.

Not surprisingly, an early question was about the highly controversial Supreme Court nomination of Judge Brett Kavanaugh – which the Senate was voting on the next day.

Gillibrand said she planned to vote against his confirmation because she thinks he’d put Roe VS Wade in danger, and “Judge Kavanaugh, he doesn’t value women, does not respect women, or listen to them.”

To a politically active but frustrated young voter, Gillibrand stressed the importance of being heard, voting, fighting for our country and values, and not giving up hope.

“And, if we can really be heard and talk about our values and our priorities and how disappointing it is to have someone like Brett Kavanaugh serve on the Supreme Court, if we articulate that by voting, and organizing our communities, and even running if you think we must –

“And most successful movements in this country have been student lead movements. So when young people care deeply, their parents care deeply, and so do their communities.“

When a Hofstra alumnus asked what actual approaches were going to be taken to effectively deal with the opioid crisis, Senator Gillibrand said, “Children are dying all across this country,” and discussed how more, and more effective, Prevention, Intervention and Response were needed.

Trump 2020:
An audience member asked, “For those of use who are on the ground, and are working hard everyday, and are gonna keep on working, what can we do so we can make sure we don’t end up with another Trump or somebody worse in 2020, outside from asking people like you to run in 2020, in all sincerity?”

“I believe we will win, in both ’18 and ’20 because I think America believes in a set of values that President Trump doesn’t believe in…. We believe in the Golden Rule…. Making sure everyone has a chance at the American Dream.

“Those are American values I believe New Yorkers and people across the county will vote for, and that will be very different leadership than today.”

The last question was a long, multi-part one about immigration, and the audience softly booed when the questioner said the parents of Dreamers should never get citizenship.

When Senator Gillibrand’s response started with “I disagree,” the audience cheered. She then added, “That was a heartfelt question, so let me tell you why I disagree,” and responded energetically. [Video starts during audience member’s question]

Gillibrand concluded with a rousing message about diversity:

“Fundamentally, do not be afraid of people who need our help. We are rich. We are powerful. We can create a growing economy.

“And the things that create a growing economy is diversity – is ingenuity – is entrepreneurism – is innovation, and that comes from the beautiful panoply of America.”

The audience applauded enthusiastically at the end of the Q&A.

Gillibrand promised to stay as long as it took for everyone who wanted a selfie with her to get one. (Well, they were sort-of selfies, since an aide took them, using audience members’ cell phones.)

The line for photos stretched from the stage to halfway across the back of the theater.